The socket of a laptop connector is one of the most vulnerable places. On most devices, the DC power connector is located directly on the motherboard and only soldering holds it in place. Violation of the integrity of the connector pins does not allow the entire system to start and this makes the power connector a rather weak point. Therefore, it is necessary to carefully handle the charging in order to minimize the possible consequences. 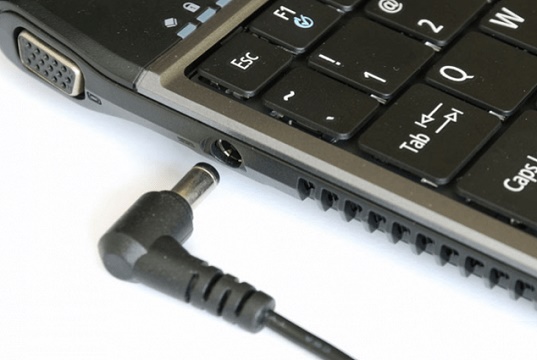 The laptop connector slot is one of themost vulnerable. On most devices, the DC power connector is located directly on the motherboard and only soldering keeps it in place. Violation of the integrity of the connector pins does not allow you to start the entire system and this makes the power connector a rather weak point. Therefore, you need to carefully handle the charging to minimize possible consequences.

All ofthese symptoms are caused by poor contact between the DC power connector and the motherboard.

To determine the failure ofthe charging connector (power supply of the laptop plug or socket), it is necessary to exclude other causes of failure.

What should I do if the connector on mylaptop breaks?

An ordinary laptop user does not have the knowledge and skills sufficient to repair the power connector yourself. You must have the skills of assembling / disassembling laptops and experience in soldering chips. To solder the connector, you need to disassemble the laptop completely and remove the laptop board from the case entirely. Solder the board connector without removing it from the case- the plastic will melt, and it is unlikely that it will work - the contacts need to be heated from the back of the board. You can spoil laptop (breaking the case, loop latches, loops themselves, board) during disassembly and assembly. It is enough to confuse the length and location of the fastening bolts and the board will be unrepairable. You need to be sure of the cause of the breakdown and understand the types of power connectors. Therefore, entrust the work to the specialists of the service center.

Replacement of the laptoppower connector, a service often provided by our service center. Qualified engineers of "F1Center", having special equipment and skills, will quickly and efficiently eliminate the breakdown. Before repairing the device, we conduct a comprehensive diagnosis of the entire device, including the charger and connector. We offer the choice of the optimal solution for restoring the operability of your laptop and select high-quality parts and Components. We provide a warranty for repairs and spare parts.