SSD or HDD. What is better for your laptop?

To store information on a laptop, manufacturers offer two options: solid-state drive (SSD) and hard disk (HDD). Between themselves, they differ in the technology of reading/writing information. Let's see what the differences are of each type. 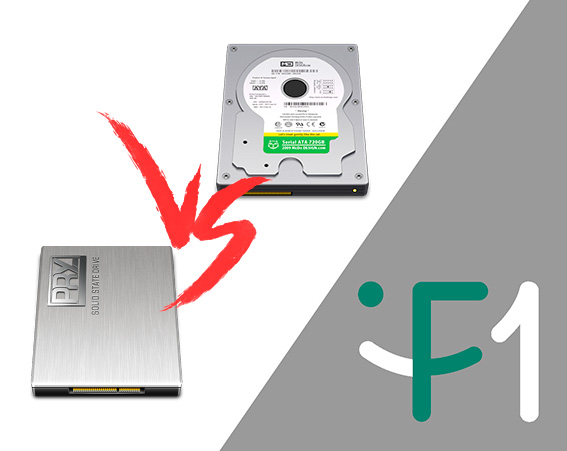 SSD or HDD. What is better for your laptop?

To store information on a laptop, manufacturers offer two options: solid-state drive (SSD) and hard disk (HDD). Between themselves, they differ in the technology of reading / writing information. Let's see what the differences are of each type.

An SSD is free of moving elements, weighs less, and runs quietly. There are no read heads consuming battery power - power consumption will be low. But there is one feature, the drive has a limited number of write / read cycles.

An HDD, or hard drive, consists of moving parts. The plates are magnetized and usually rotate at a speed of 5400, 7200 or 10000 rpm. A special head writes, deletes and reads information from magnetic disks. Hard drives were called "hard drives" precisely for the characteristic noise during operation. Due to the fact that there are moving elements inside it, it does not survive a fall, and its speed is limited.

Knowing the differences between HDD and SSD will help you rationally choose a laptop with a suitable medium - optimal for work or entertainment. To determine which option is preferable for your laptop, consider the main characteristics of the two types of drives.

The speed of SSDs depends on the parameters of the controller, which searches for data on the disk. As soon as the controller determines where the information is located, it is almost instantly read. As a result, SSD speed is 2-4 times higher than that of HDD.

The difference is clearly visible when the operating system starts. Windows 10 on the hard drive loads 40-60 seconds, and on the solid state drive after 10 seconds it is ready to work.

Conclusion: To increase the speed of operation, choose SSD.

HDD has a large capacity: you can find models with a volume of 10 and 12 TB. The maximum SSD capacity is still within 4 TB, but they promise to fix it in the future.

Output: If more memory is needed, select HDD. Although with the development of cloud storage and the advent of external hard drives, this has ceased to be an acute problem.

Since we select a hard drive for a laptop, the amount of energy it consumes is also very important, because it directly affects the battery life of the entire device. On average, hard drives consume several watts, and SSDs consume less than 1 watts. Due to the lower power consumption, the latter also get less heated.

Conclusion: If battery life is important, it is preferable to choose an SSD.

As mentioned above, inside the HDD there are read heads, during operation they move, and thereby create noise and vibration. SSDs have no such side effects.

Conclusion: SSD is more suitable for silent and comfortable work. Although modern HDDs also began to work quieter compared to their "relatives" a decade ago.

Solid state drives have one significant drawback - a limited number of cycles of rewriting information. Therefore, modern models try to overwrite all cells evenly so that no part of the disk crashes ahead of time.

The life of an SSD depends on how it is used. If you record dozens of gigabytes daily, it will not last long. If overwriting data is carried out infrequently or in small quantities, then in this case the SSD will serve at the HDD level.

For the same reasons, SSDs do not need defragmentation, since this is an extra rewrite cycle.

Conclusion: SSDs are not suitable for those who often write a lot of voluminous files. Hard drives, on the other hand, have unlimited rewriting cycles.

Sometimes a hard drive crashes due to unforeseen circumstances. For example, for a hard disk, this is a drop or a magnetic field. Moving elements are damaged from the impact of the plate, and after a while the HDD becomes unusable. If a magnetic field of sufficient magnitude is applied to the drive, it can disrupt the magnetic order in the plates, and accordingly all information will be lost.

These factors cannot disable the SSD. However, a solid-state drive burns out completely from a power surge. In a similar situation, only a small area is damaged in the hard drive, plus it is easier to recover information from it. Recovering data from an SSD is much harder, and this is less common than with a HDD.

Conclusion: Recovering information from the hard drive is easier, but the solid state drive does not break when it falls.

Despite the many advantages, the main factor restraining the growth of sales of solid state drives is the price. In terms of the cost of one gigabyte, an SSD is several times more expensive than a HDD.

Conclusion: The larger the volume of the hard drive, the less each gigabyte costs, and the most economical option (when calculating the cost of 1 GB) is a large hard drive.

Given all the features, it is preferable to have an SSD traveling with their laptops and those who appreciate high performance. For those who work with a huge number of files, HDD is more suitable.

However, the most effective option is to add a solid-state hard drive. In this case, the operating system is installed on the SSD, and personal files are stored on the HDD. As a result, the OS and programs start up quickly and there is plenty of space for storing information.